My name is Yasmin. I’m in my 20s, and I study political science and sociology in British Columbia.

I am also a Rohingya.  That’s something I haven’t always been proud of, but I am today. 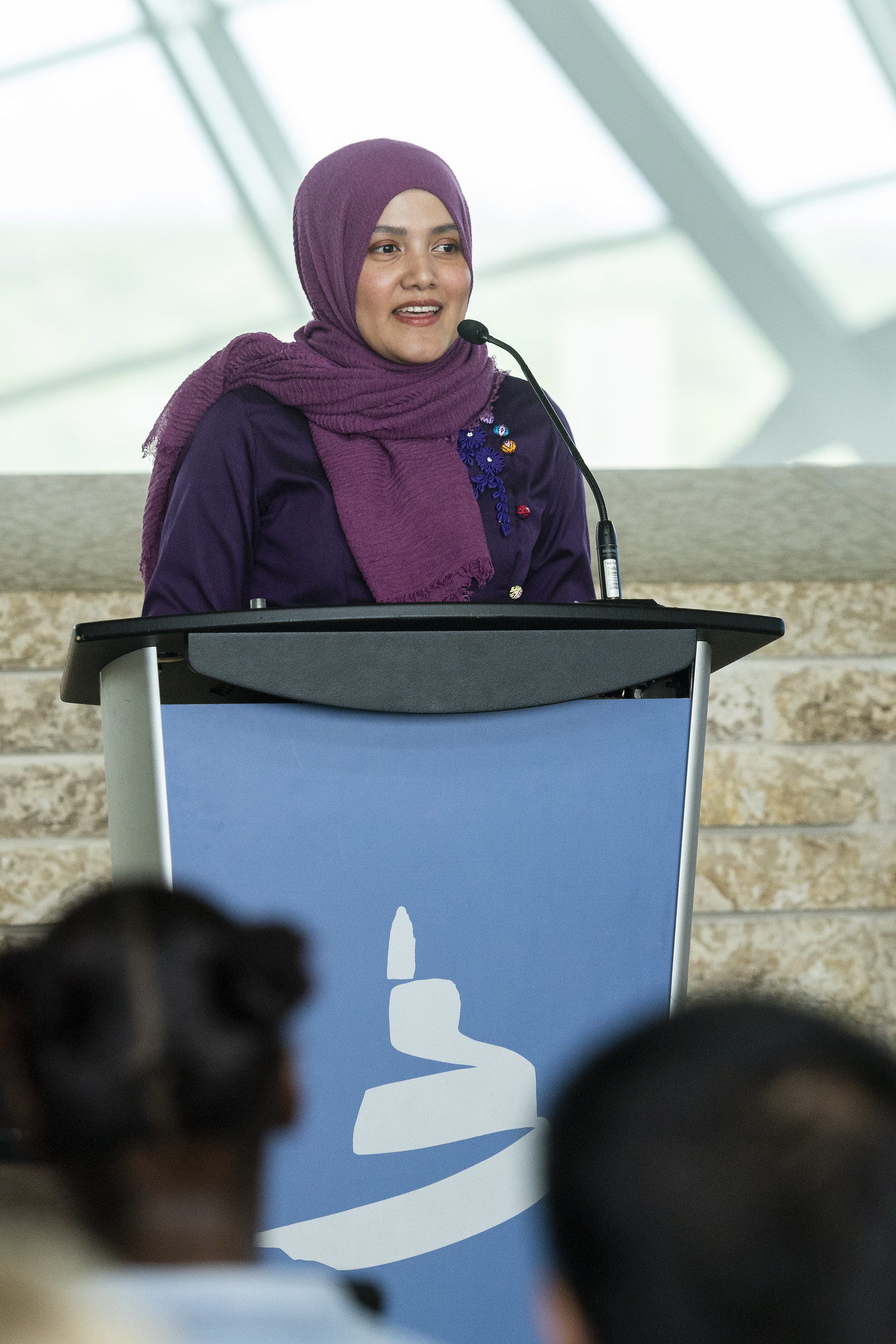 I was born in Northern Rakhine state in Myanmar. The Rohingya have lived on those lands for centuries, but for a long time, we have been persecuted by the government. In 1982, we were even stripped of our citizenship. We became stateless in our own homeland – unwelcome because of our religion and skin colour.

In 2017, after decades of ongoing violence and oppression, the military in Myanmar began slaughtering my people. They set landmines, burned houses, and raped women. It was genocide. Over one million Rohingya — mostly women and children — fled with whatever they could carry. As I’m writing this letter to you, they are still living in refugee camps in Bangladesh, in makeshift structures without the basic necessities of life and without anywhere to call home.

But I am lucky, because today I live here in Canada, the home of the Canadian Museum for Human Rights. I’ve learned first-hand the importance of human rights, and that’s why I’m writing to ask for your support of the Museum.

In the 1990s, when I was three years old, my parents took me and fled Myanmar for Thailand. They knew that violence had broken out in the past and that it would again, and they wanted a better future for me. They wanted me to get an education, something that Rohingya girls were denied in Myanmar.

Unfortunately, life in Thailand was grim. Thailand doesn’t officially permit refugees, and so we had to live in the shadows, always under threat of arrest and deportation back to Myanmar. Without any rights or protections, every day was uncertain. I was bullied and taunted by the other kids because I didn’t look like they did. Sometimes my parents would come and get me in the night because we had to hide from the police. But what choice did we have? The alternative was being forced back into Myanmar, where I would likely have been among those running for my life from bullets and tanks during the genocide.

In order to survive, my mother and father had to work at low-paying jobs almost all the time, leaving me to care for my new younger brother, who was born with autism. I really wasn’t sure what was going to happen.

But one day, my father met a few Canadians. They were inspired by hearing him speak about my family’s experience and offered to help us come to Canada as refugees. It took years, but on the night of June 24th, 2011, our plane landed at the Vancouver airport and we started a new life.

I know what it is like to live without rights and dignities. I know what it’s like to be persecuted because of what I believe and what I look like. No one deserves that fate. That’s why the Canadian Museum for Human Rights is so important.

Every year, the Museum welcomes 300,000 visitors of all ages to learn stories like mine. Each and every visitor is impacted by these stories. They leave transformed, ready to take action when they see human rights violations in their communities. Through online toolkits for teachers and students, exhibitions that travel across Canada and around the world, and public events that spread awareness of essential human rights issues, the Museum is building a national and international culture of respect for human rights.

Will you make a contribution of $50, $100, or $500 dollars today?  Every dollar you contribute to the Museum helps create a generation of people committed to defending human rights here in Canada and around the world. If we work together, one day we can realize a world where no one has to worry about whether their child will be a victim of genocide.

Soon after it began, the Rohingya genocide struck the village I was born in. My family’s homes were burnt. They were forced to run for their lives. I couldn’t let this terrible injustice happen without doing something. One day, I want to hold my aunts, uncles and cousins in my arms and tell them I love them. I want to visit the place where I was born. So, I took action.

I began raising funds to help those in refugee camps. I reached out to the Canadian government and asked them to recognize the genocide that had taken place. And I became the President of the Rohingya Human Rights Network.

Alongside other Rohingya people, we approached the Canadian Museum for Human Rights. At first, we wanted to talk about the way that Aung San Suu Kyi, the leader of the Myanmar government who had been made an honourary Canadian citizen, was portrayed in the Museum. But we ended up doing so much more.

Working together, we developed a special exhibition that is on now at the Museum – Time to Act: Rohingya Voices. We gathered stories from Rohingya people in Canada, as well as images and testimony from those living in the refugee camps in Bangladesh. The exhibition shares the strength and resilience of my people. We are victims of genocide, yes, but we are so much more than that. Just like everyone else, we have hopes, dreams, joy, laughter and love.

I still remember the first time I saw the name “Rohingya” on the wall in the Museum. For so long, I lived in denial of who I was. In my experience, being Rohingya meant being shunned, abused, ignored and disrespected. I didn’t want to be Rohingya. I didn’t know that I deserved respect or justice. Seeing my community’s name in the Museum and walking through the entire exhibition for the first time was deeply emotional: it reinforced for me that we deserve rights and dignity like everyone else.

This is the incredible impact of the Museum! Visitors from around the world are taking notice. They’re learning our story. And not just our story, but hundreds of stories like ours, of courage and resilience in the face of injustice. Just like the Canadians who helped my family come to this incredible country, I know those visitors are being inspired to take action and help Rohingya people who live in danger every day. This is only possible because of the partnership we developed with the Canadian Museum for Human Rights.

Your support of the Museum will help create education programs to inspire students to defend human rights in their classrooms and communities. It will make more exhibitions like Time to Act: Rohingya Voices possible. It will help us prevent human rights violations from happening in the first place.

We need to build a culture of respect for human rights everywhere – in Canada, in Myanmar, and in every nation on earth. We can inspire more people to take a stand when they see terrible things happening, to the Rohingya or anyone else. But to continue to make progress, we need your help. We cannot afford to be passive when we see things we know are wrong. We need you to be a part of creating positive change.

I’m asking you to donate $50, $100, or $500 through the Friends of the Canadian Museum for Human Rights today. Your support goes directly into programs and exhibitions that are impacting Canadians from coast to coast to coast. With your support, we can realize a world where human rights violations are a thing of the past.

P.S. The Canadian Museum for Human Rights worked with my community to share the story of the Rohingya people. The exhibition is impacting people across Canada. If we believe that human rights violations should be a thing of the past, we can’t afford to wait. Together, we can create a culture that respects human rights. We can inspire the change we need to make the world a better place for everyone. I hope you will make your donation through the Friends of the Canadian Museum for Human Rights today. Please also consider becoming a monthly donor so that we can count on your support moving forward.

To support the ongoing work of the Canadian Museum for Human Rights, click here to visit us our secure online portal.