My name is Omar and I’m lucky to be alive. And not just alive: right now, life is good. I live in Winnipeg, Manitoba with my parents, my four brothers, and my sister. I run a small painting business, I’m finishing high school, and I’m thinking about going to university or college.

But a few years ago, I wasn’t sure I would be alive today. 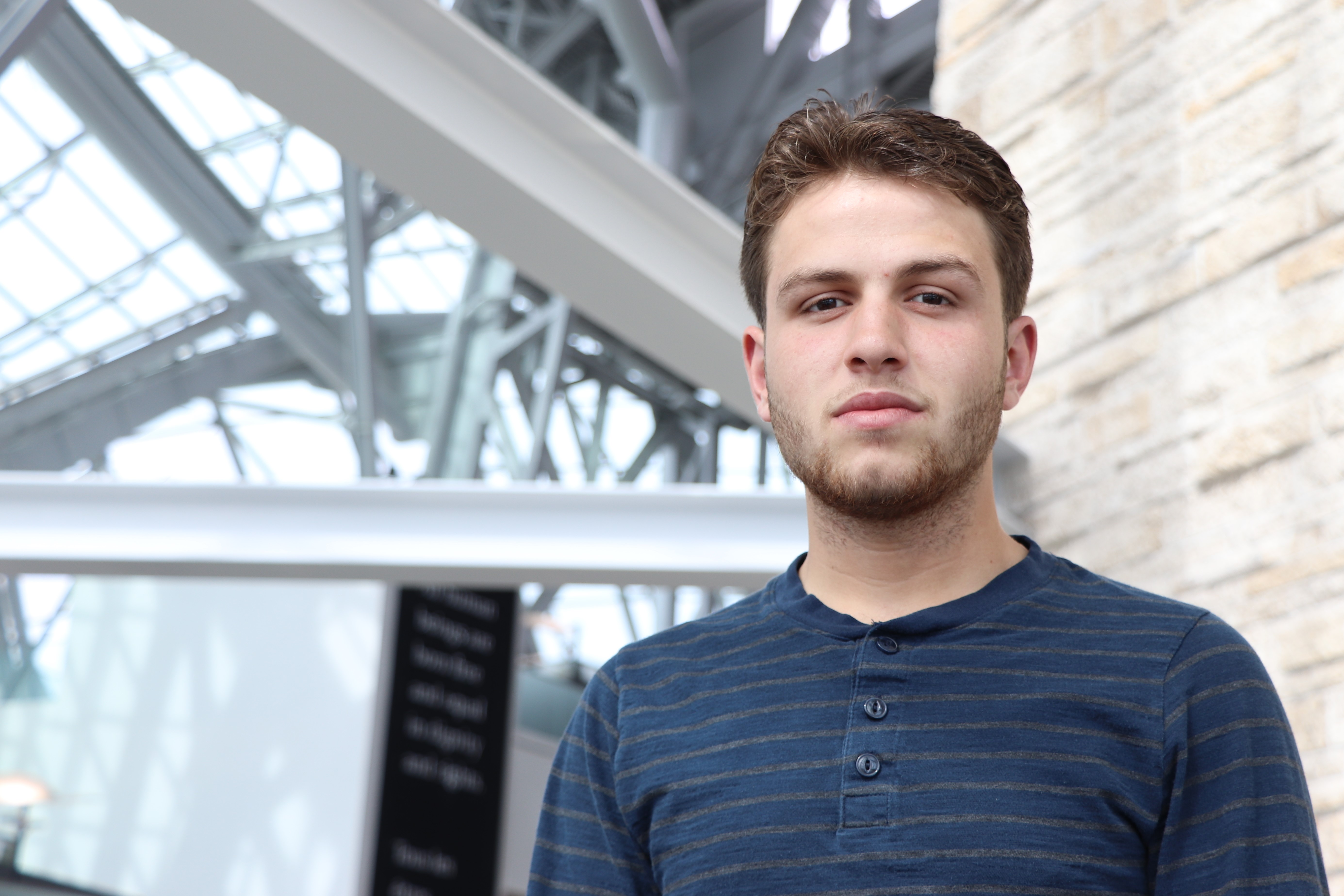 I was born in Syria, in a city called Al-Bab on the outskirts of the capital city of Aleppo. In 2011, across Syria, people like me took to the streets in peaceful protests calling for basic reforms to our government and society. We wanted the right to speak freely, without being arrested by the government’s secret police and taken away. We wanted the right to vote in elections, and have the government work for us, instead of against us.

From a very young age, I would organize my friends and we would head to the rallies together after school. We were just kids, but we knew that we would need to take action if we wanted a brighter future.

Soon, the protests became tragic. As you know from the news, over the next few years hundreds of thousands of people were killed or injured as government forces beat and shot those who took to the streets to demand a better life for their families. A boy I was standing with at a rally was shot right in front of me. The truth is, if he hadn’t been standing there, the bullet that killed him would probably have hit me.

As the violence got worse and worse, my family knew we had to leave Syria.

In 2016, we were accepted here in Canada as refugees and our lives changed forever. Here, I am safe when I walk in the streets. I don’t worry about the government committing mass killings. My family is safe. I don’t worry that someone is going to come for me in the night because I spoke my mind on Facebook or went to a gathering with my friends. Here in Canada, we can imagine a future for ourselves — a future that includes an education for my siblings and me.

It was in school this year that I took part in a program designed by the Canadian Museum for Human Rights called The 180: Turning from Injustice to Justice. Along with my classmates, I came to the Museum and learned about human rights. I learned that we all have the right to speak our minds, to live in a peaceful society, to get an education, and to live without the fear that we will be persecuted or even killed for who we are or what we believe. These things that I wanted in Syria were actually things I deserved. It was an inspiring moment for me.

So, when students in the program were asked to choose a human rights issue we cared about and take action to create positive change, right away I thought of the friends and family I’d left behind in Syria. I wanted to do something to help them, because even though we were safe, so many others weren’t.

I began selling pizza during lunch time at school to raise funds to support workers in refugee camps. I started a petition to call for an end to torture in Syrian prisons. I spoke on my school’s radio station and published in our newspaper about the situation in Syria. After I presented on the work I had done to my class, I was chosen as one of six students from the hundreds who took part to present my project to a live audience at the Museum in 180 seconds or less. 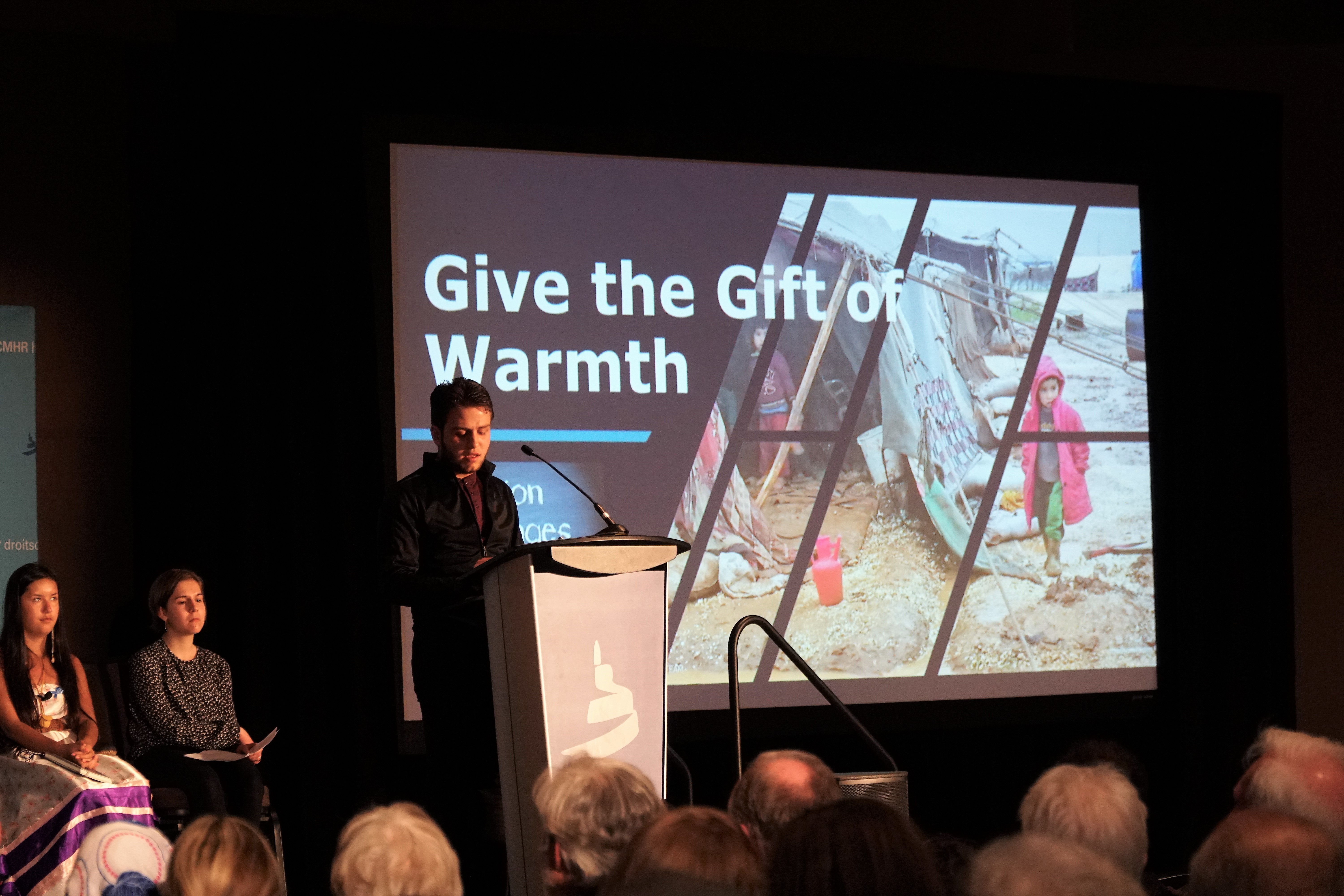 Because of the program, my teachers, and the Museum, I took action for a human rights issue I was passionate about, and in my own way, I made the world just a little bit better.

I’m asking you to support the work of the Museum and programs like The 180 that empower students like me — and many thousands more each year — to be changemakers and take action for human rights. I know you care about making the world a better place, too. Will you contribute $50, $100, or $500 dollars to help students like me make a difference in the world? Now more than ever, the world needs a new generation of young people who have the skills to make change.

When I was a very young boy, I remember Syria being a good place to live. My father ran a painting business, and I enjoyed helping him out on his jobsites. As the government crackdown on peaceful calls for democracy and freedom became more and more brutal, it became difficult to feed our family or imagine a good future in Syria. Business dried up for my father and he started driving a taxi, but it just wasn’t enough to survive. He and I started to work together, doing anything to survive and put food on the table.

After the government brutality began, I experienced things no one should have to, especially a teenager. I was shot at. I saw people killed. I witnessed attacks on women who were simply following their religion by wearing head coverings.

All these experiences with violence have taught me something: it’s not enough just to support aid agencies who help deal with the aftermath of violence. We need to stop the kind of mass killing and human rights violations I experienced in Syria BEFORE THEY BEGIN.  No one deserves to be shot and killed at a rally. No one deserves to have their religious symbols ripped from their body. No one deserves to live in constant fear.

And no matter how much good work happens to support refugees or even people affected by things like bullying and violence in our schools, it won’t address the root cause of the problem: an indifference to the humanity of others. The cure for that indifference is a culture of human rights, where everyone is protected, because we all believe that everyone matters. If we can build that culture, starting right here in Canada and spreading it around the world, we can truly take steps to end the kinds of violence I’ve seen.

The Canadian Museum for Human Rights is on the front lines of that struggle. They’re educating 30,000 students like me across Canada every year, teaching us about human rights so that we can take a stand and stop human rights violations when we see them in our communities.

One day, those same students will be the ones leading us into a new era on the international stage: one where human rights are respected everywhere.

But it can’t happen without you. As much as the future is in the hands of youth like me, it’s also in yours – so I’m asking you to support the Canadian Museum for Human Rights today. Your support is the difference between kids getting the kind of human rights education I got, and kids not thinking what they do matters. I’m asking you to contribute what you can today to support the work of the Museum, so that we can create a human rights culture together. And please consider making a monthly donation .

I’m passionate about this because I have seen what happens when violence becomes normal and a culture that respects everyone is trampled. And I see my Canadian-born friends who are also passionate about human rights. The passion of youth with your support and the support of your generation will make a real difference. We can’t do it without you. I know some people might be cynical about the idea of preventing wars or ending mass violence. But I believe it’s possible, and I think you do too.

PS. I saw first-hand the violence that spread across Syria and turned our country into a war zone. I saw a boy die in front of me. I experienced things that no one should have to. When I arrived in Canada, the Canadian Museum for Human Rights and their program The 180: Turning from Injustice to Justice inspired me to take action to make the world a better place. It also made me think about how important it is to prevent this kind of violence from happening again by creating a culture of human rights that protects everyone, no matter where they were born – because if human rights can be violated anywhere, they can be violated everywhere. I hope you will make a donation right now while you’re still thinking about it. Let’s work together to make that better world we all dream of a reality.

To support the ongoing work of the Canadian  Museum for Human Rights, visit http://friendsofcmhr.com/donate-now/. We also hope you will consider becoming a regular monthly donor.