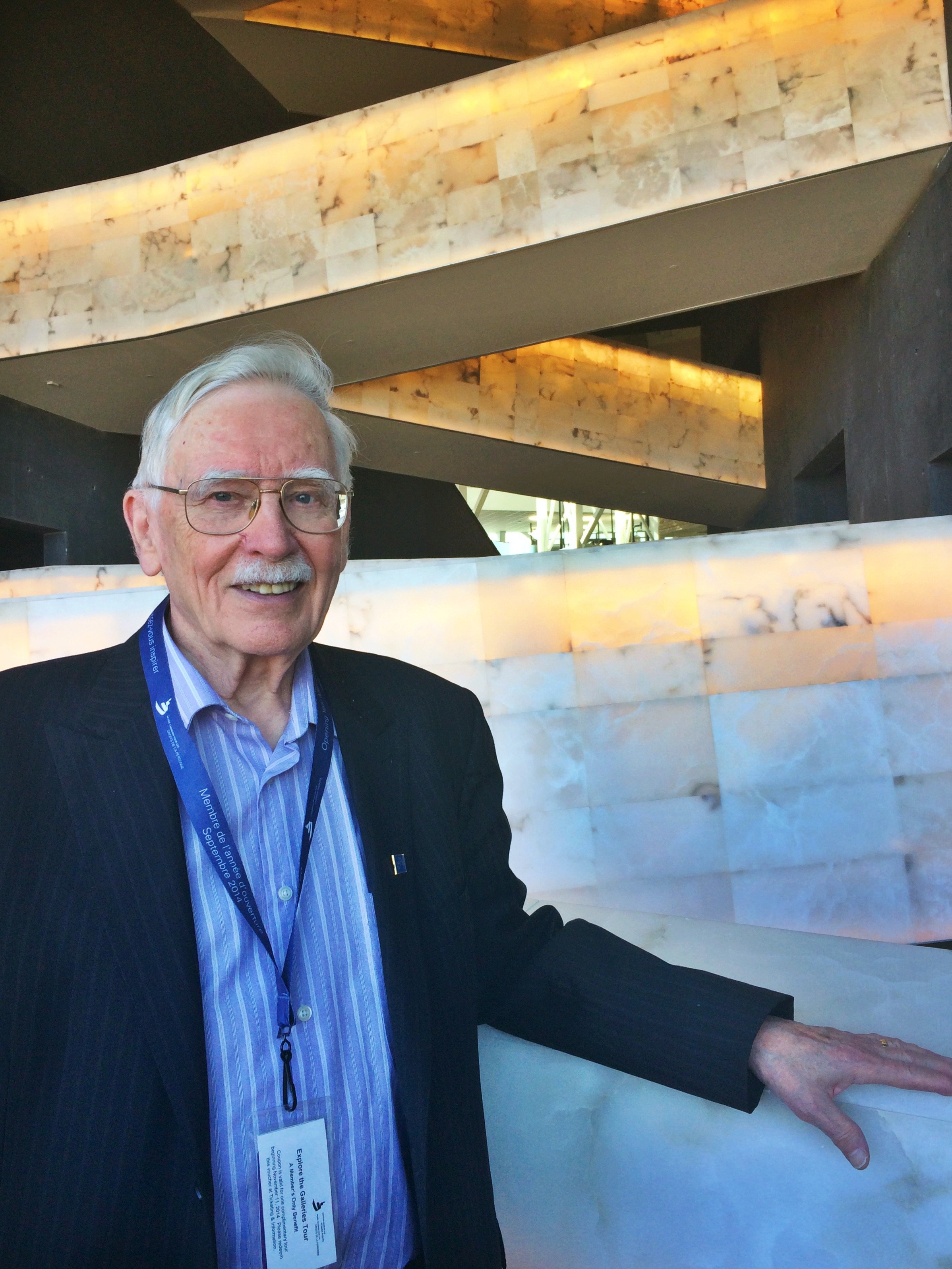 “It’s so much easier to give than to receive.”

That is the motto Raymond Currie and his wife, Charlene, follow in their day-to-day life. The pair, who have a keen interest in human rights and were early supporters of the Museum, have dedicated their lives to helping people.

“I grew up in a home that was orientated towards service,” Raymond said.

His parents had taken in an immigrant after the Second World War and helped her to get on her feet in Canada. Every weekend they would also drive spouses to Stony Mountain Penitentiary so they could spend time with their loved ones. These acts of generosity influenced Raymond and fuelled his interest in human rights and justice issues.

Furthering his interest was the experience of discovering that their two adopted children were both living with disabilities, which brought forward challenges of trying to access services for their son

“Our daughter lives with autism and the services and support have been tremendous,” he said. “Our son lives with FASD and has not been able to access a lot of resources.”

Raymond’s son has not been officially diagnosed with FASD because the birth mother has not confirmed if she drank during her pregnancy. Without the official diagnosis he has been deprived from access to FASD programs and services.

“So the issue of human rights and the issue of falling through the cracks has always been a concern to me,” he said. “When the Museum was proposed it was a no-brainer for us to support it right away.”

Since the Museum was built, Raymond has visited more than 20 times.

“The first tour I took was two hours and I realized there was so much here and I couldn’t do justice to it,” he said.

At that point he made a commitment to spend two hours on each floor to give each gallery and each exhibit the attention he feels they deserve.

“It’s an incredible education. Every time I come I’m learning something new,” he said.

Recently, following the release of the Truth and Reconciliation Commission’s final report, Raymond took the lead in partnership with Indigenous people in developing Circles for Reconciliation with the goal of creating 100 discussion groups (each group has 5 Indigenous and 5 non-Indigenous persons and each group meets 10 times) to learn about topics related to reconciliation.  He brought one of the groups to the Museum to take part in the Museum’s Mikinak-Keya Spirit tour.

“It’s easy to encourage people to visit the Museum. I come both because I try to bring people and also because the Museum is changing and I want to keep learning,” he said.  “You learn so much about what’s going on in the world – not only the tragedies but also the achievements. It’s uplifting. It’s a message of hope.”

He said it’s easier to immerse yourself in a story at the Museum, rather than watching it on the news.

“When you actually see, for example Malala’s exhibit that was here, and see how she spoke to other girls and how important education was to her and what she had to go through to get that education, and how she identified herself, which led to her being targeted, that took enormous courage,” he said. “That’s something you can feel.”

Find out more about the Circles of Reconciliation by visiting circlesforreconciliation.ca 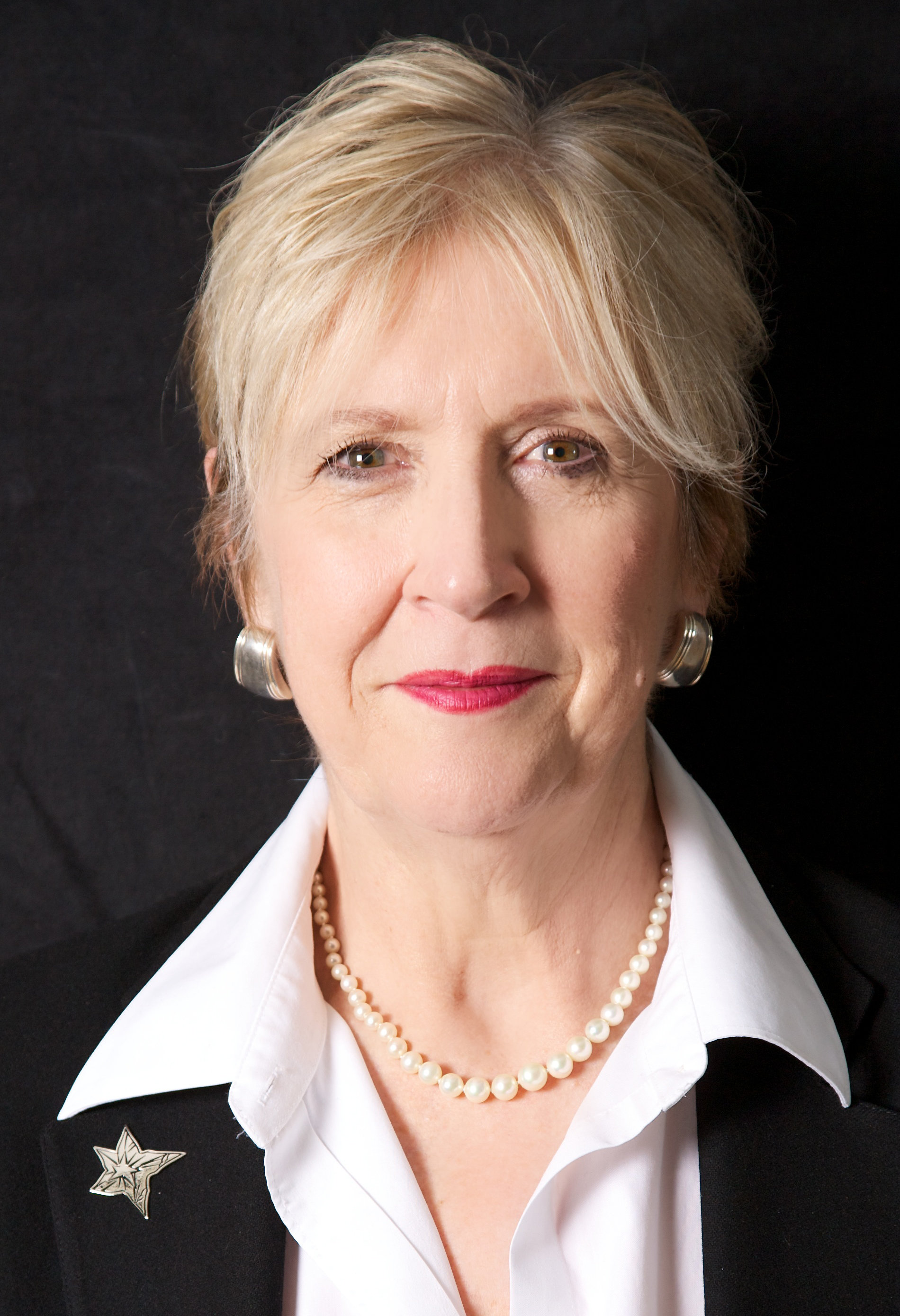 Message from the CEO

If you’ve visited the Museum during a busy morning or afternoon, you won’t be surprised by what I’m about to tell you.

One of my favourite things to do when I leave my office is to listen in on the school groups touring through the Museum. Groups will often pause in the Stuart Clark Garden of Contemplation for a discussion, and it makes me truly happy to hear what the students have learned from their visit.

Most impressive to me is how the interpretive guides help the youngest of students understand the importance of equality. Each guide has their own version, but the lesson remains the same:

Students are taken to Rebecca Belmore’s art piece in Indigenous Perspectives. They each craft their own imaginary hand pressed clay beads and add their imaginary efforts to the art piece. The guide talks about the art piece’s intention to show how working together always has the biggest impact. The students also love playing in the lights of inclusion, where they can connect their bubbles of light and sing their human rights rap to invite their classmates back into the circle.

My favourite activity is when students are asked to choose their favorite between two options, cats and dogs or playing outside and watching cartoons. After sharing their answers, they’re then asked if they can still be friends, even though they are different. After the activity the guide will lead a discussion with an important message: We are all equal despite our differences, and should be treated as such.

You have helped these incredible moments in learning take place, and it is up to you to ensure the Museum can provide extraordinary education programs to students across the country for many years to come.Thank you so much for your continued support.

Diane Boyle
CEO, Friends of the Canadian Museum for Human RightsP.S: Help the Museum to continue developing its extraordinary education programs by making a donation today.

Celebrating Gandhi: an evening of FUNdraising to repair the Gandhi statue at The Forks 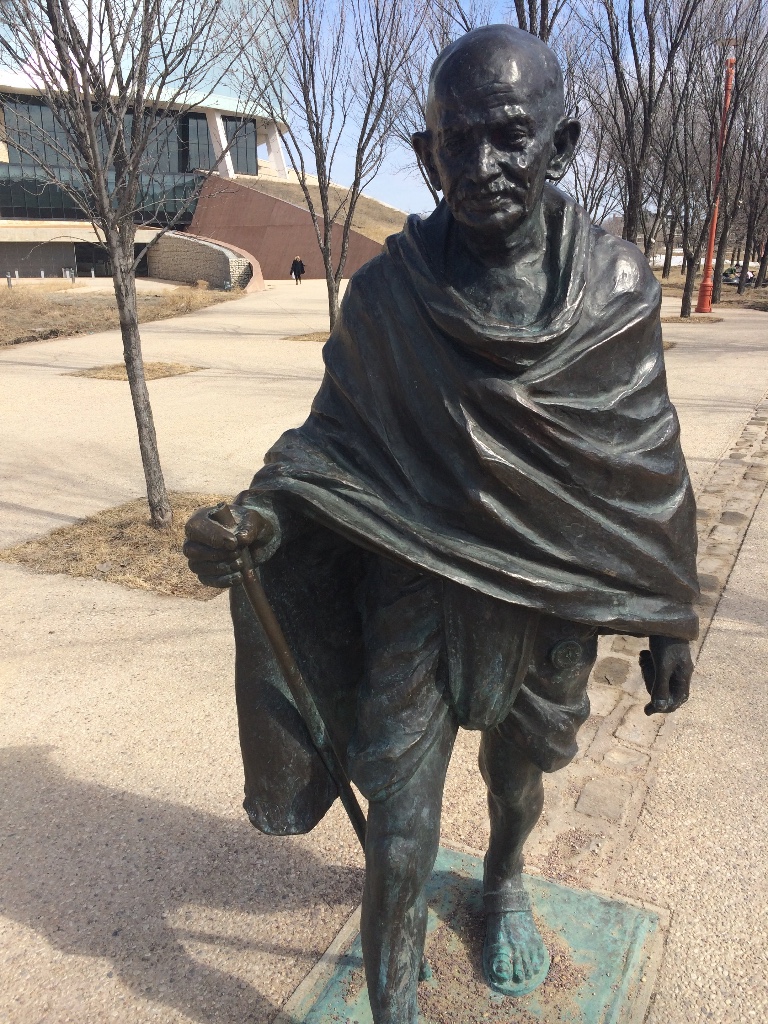 Join us on Thursday May 18, 2017 for an evening of food, entertainment and celebration at the East India Company, 349 York Avenue in Winnipeg – in support of repairs for the Gandhi statue near the main entrance of the Museum at The Forks.

Save the date: Our 10th annual Drive FORE the Stars Golf Tournament 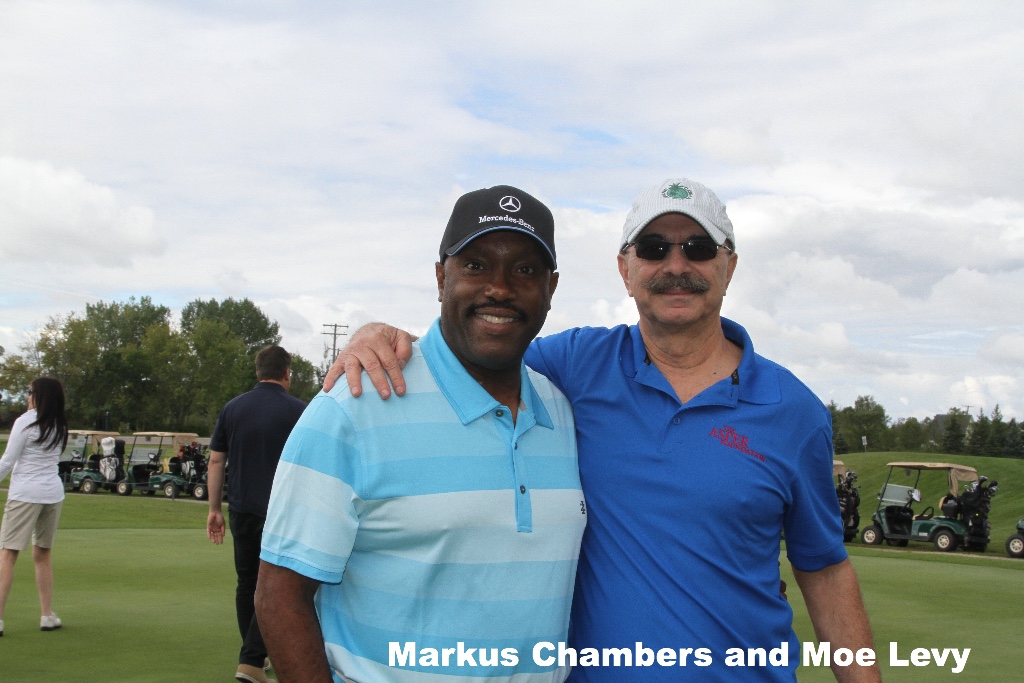 Registration is NOW OPEN for the 10th annual Drive FORE The Stars golf tournament, taking place Thursday, August 24th, 2017 at the beautiful Larter’s at St. Andrew’s Golf and Country Club in Winnipeg, Manitoba.We hope you will join us in making the day a success! This increasingly popular event is a great opportunity for businesses and local organizations to support the Museum and get their name out in the community. Sponsorship opportunities are also available.

Get ahead of the game and arrange yours now! Contact DFTS Chair Markus Chambers at 204.791.1950 or driveforethestars@mymts.net or Friends at info@friendsofcmhr.com.

The Canadian Museum for Human Rights was recently presented with the Spirit of Winnipeg award for Design and Building by the Winnipeg Chamber of Commerce. The awards are presented annually to businesses and organizations that have made a meaningful contribution to the city.

At the Museum: Our Canada, My Story until Fall 2017

Featured in the Expressions Gallery, which is generously supported by the Richardson Foundation and Richardson Family.

Our Canada, My Story welcomes you to make a connection with different people across the country. These stories explore what it means to work towards equality, inclusion and dignity for all Canadians.

Ali Duale, Halifax: Ali and his wife fled a brutal civil war in Somalia in 1991, living in a Kenyan refugee camp with three children until they arrived in Canada six years later. Ali became a firefighter and now has eight children and is heavily involved in the Halifax community.

Widia Lavrivière (Montréal): Widia co-founded the Quebec chapter of the Idle No More movement in 2012, motivated by concern for ancestral lands and the environment after passage of federal Bill C-45. Recently, Widia founded Mikana, an organization that raises awareness of  issues faced by Indigenous peoples.

Thomas Poulsen (Calgary): Thomas was an actor, dancer, activist and humanitarian who was propelled to make the world a better, fairer place for all. Born with cerebral palsy, he used crutches for improved mobility. He was active with MoMo Mixed Ability Dance Theatre, which brings together professional and prospective artists of all abilities to explore movement, voice, theatre, dance and improv. He was a member of Disability Action Hall and worked professionally to assist people with developmental disabilities. Sadly,Thomas passed away in January 2017.

Sylvia Cloutier (Iqaluit): Sylvia was born in Kuujjuaq, Nunavik in Northern Quebec and now lives in Iqaluit. In her daily life, she faces challenges to the right to healthy food, dealing with issues surrounding food security, accessibility and high prices that confront most people in the North. A throat singer and drum dancer, Sylvia is also co-founder of the performance company Aqsarniit, which produces shows that promote Inuit culture.

Shawn Jobin (Saskatoon): Shawn is a Fransaskois (Saskatchewan francophone) singer-songwriter, rapper, slam poet and DJ who has won multiple awards for his French-language pride anthem, “Au nom de la nation: Tu m’auras pas,” which is a rallying cry against assimilation. His music expresses a love for the French language and his culture and his sense of belonging. He is proud to be part of a generation that pursues social justice through art and culture.

Mona Greenbaum (Montréal): Mona helped reform the Quebec Civil Code in 2002 to allow same-sex couples to adopt children born or living in Quebec, or to start their families through assisted procreation. It meant that she and her same-sex partner could be recognized as equal parents of their children. She has since continued the fight for equal rights and opportunities for lesbian, gay, bisexual and transgender parents. Mona is executive director of the LGBT Family Coalition in Quebec.

Kevin Takahide Lee (Vancouver): Kevin is of Japanese and Chinese descent, with grandparents who were imprisoned and forcibly relocated as Japanese-Canadians during the Second World War. He feels a strong connection to his family’s history and is moved to tell their story. Kevin is a professional tenor with the Vancouver Opera and started a choir for newcomers to Canada, which welcomes others looking to bridge multicultural and multigenerational divides.

Find out more and watch the stories online at humanrights.ca 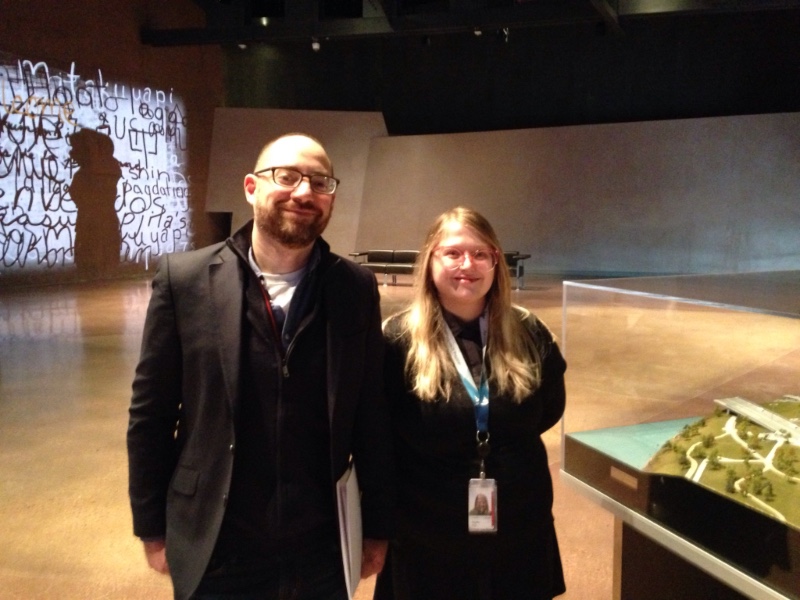 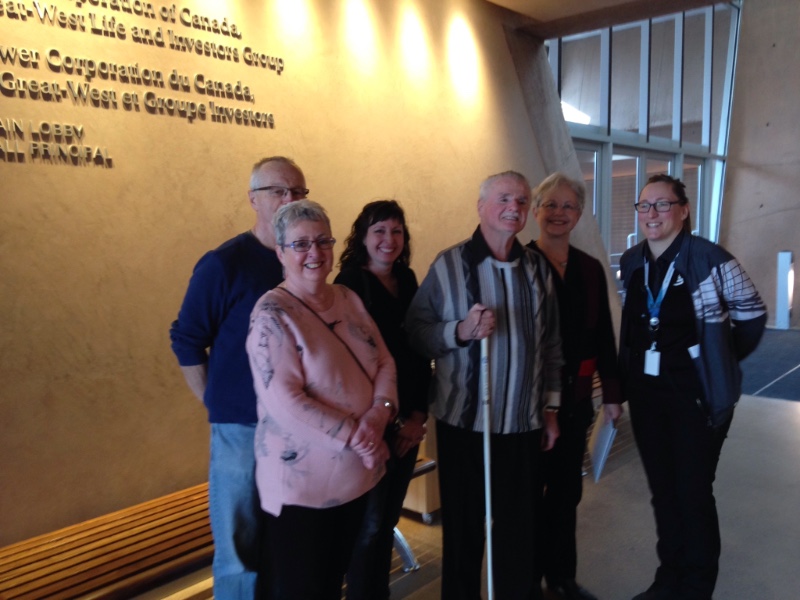 During his forty-year career with the Canadian National Institute for the Blind, Jim lived and worked throughout Canada with his last nine years serving as President and Chief Executive Officer. He established the CNIB Government Relations and International Services office based in Ottawa and served a four-year term as President of the North America/Caribbean Region of The World Blind Union.  Currently, Jim serves as the Honourary Executive Director of The Sir Arthur Pearson Association of War Blinded.

Eliott began a distinguished legal career as a Crown Prosecutor in Toronto and in 2008 became a war crimes prosecutor for the International Criminal Tribunal for the Former Yugoslavia in The Hague, an experience that became the impetus for his first book. “Tell It To The World – International Justice and the Secret Campaign to Hide Mass Murder in Kosovo”